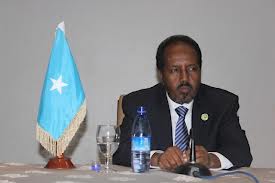 President of Somalia, Hassan Shiekh Mohamud welcomed human rights watch report on Somalia which highlighted abuses commited against IDPs in the refugee camps in Mogadishu, by government soldiers.
“The federal government of Somalia welcomes latest report of HRW. This detailed and efficient report shows a painful and unacceptable realities on the ground” said the president in a statement released.
He pledged to carry out investigations to learn  the accuracy of the findings of human rights watch.
“We will investigate the accuracy of the report, and then take appropriate action against any one who commited crimes against our citizens” the statement said.
In a report released on Wednesday, Human rights watch accused members of Somali security forces and armed groups human rights violations against displaced Somalis who have arrived in Somalia’s capital fleeing famine and armed conflict since 2011.
Human Rights Watch said,The new Somali government should urgently improve the protection and security of Mogadishu’s internally displaced population.
Ahmed Abdisamad,