The names of these countries are :
1- South Africa
2- Ethiopia
3- Djibouti
4- Belgium
5- United Kingdom
6 – France
7- South Sudan
8- Kenya
I have personally used Somaliland passport during my first arrival in the United Kingdom in May 2004 after obtaining a six month visa from the British Embassy in Addis Ababa , Ethiopia . Although most of these countries have not officially recognized Somaliland as sovereign state , they still know that it is the save haven of peace in the Horn Africa and that Somaliland has better democracy then many other recognized African countries . The following map of Africa shows how Somaliland is considered among the best African democracies in the continent equaling to that of South Africa. 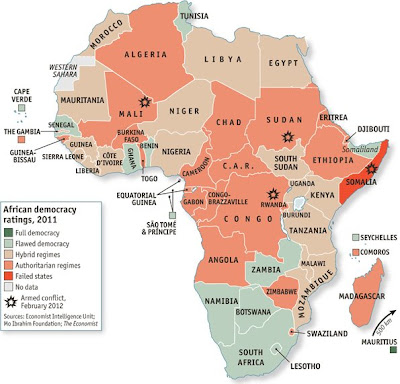 Somaliland hopes to gain international recognition very soon after the country has carried out two free and fair presidential elections , one parliamentary election and two municipal elections.
The country has its own flag , its own currency,  banks , passport , police and military force.
Somaliland broke away from Somalia in May 18 , 1991 after a bloody civil waragainst the dictatorship of the socialist regime of Siyad Barre.