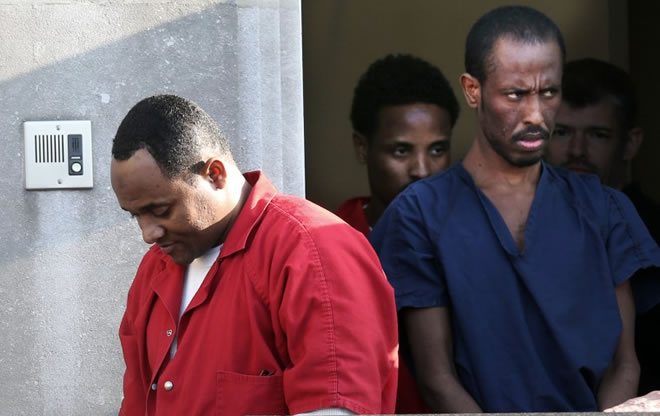 NORFOLK – Three Somali men were sentenced Friday to life in prison without the possibility of release on charges they hijacked a sailboat in 2011 off the coast of Africa and killed the four Americans they found on board.It took a federal jury about 8 1/2 hours of deliberation to reach the decision and reject the pleas of prosecutors to sentence the men to death.

“What everyone should be thinking about today is the victims’ families,” Lawrence Woodward Jr., one of seven defense attorneys involved in the case, said outside the courtroom.

While acknowledging he was “professionally gratified” by the jury’s decision, Woodward stressed “our hearts go out to the families.”

Reached by phone in California, the sister of one of the victims lamented the jury did not see fit to sentence the three men to death.

“I don’t know how they can shoot someone with an AK-47 and not get the death penalty,” Cynthia Macay said through tears. “They almost will have a better life in prison than in Somalia.”

Ahmed Muse Salad, Abukar Osman Beyle and Shani Nurani Shiekh Abrar were convicted July 8 in U.S. District Court of 26 crimes – 22 of which were punishable by death.

The charges stemmed from the deaths of four Americans on Feb. 22, 2011, on a 58-foot yacht named Quest. The victims were Scott and Jean Adam, a California couple who owned the boat, and Phyllis Patricia Macay and Robert Riggle, both of Seattle, who had joined them on the voyage.

FBI agents, Navy officials, and convicted pirates who were involved in the fatal hijacking testified during the trial. According to prosecutors and court records, the Adams and their friends were asleep at sea Feb. 18 when 19 men boarded the yacht armed with assault rifles and a rocket-propelled grenade launcher. They took control and began to sail for Somalia, where they intended to conduct ransom negotiations.

The hijackers never made it to shore, however, and four days of negotiations at sea with Navy officials failed.

Prosecutors said one of the pirates fired a rocket-propelled grenade at the American guided missile destroyer Sterett. Shortly thereafter, Salad, Beyle and Abrar opened fire on the hostages.