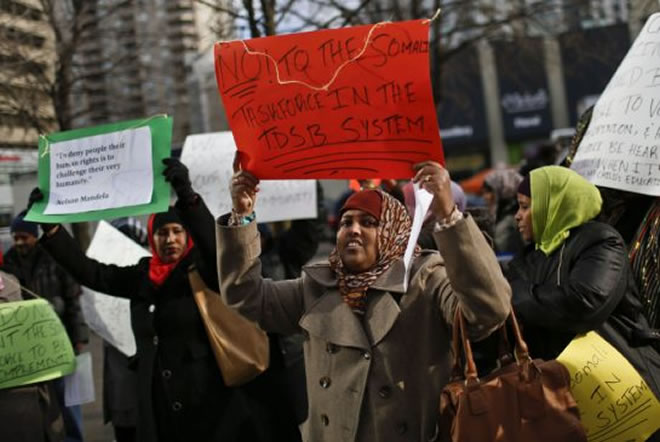 LUCAS OLENIUK / TORONTO STAR Order this photo – Protestors demonstrated outside of the Toronto District School Board Tuesday morning and voiced their displeasure with the TDSB Somali task force. They feel the program stigmatizes Somali children.

Special help being proposed to help students of Somali background succeed in school — scholarships, mentors, more focus on Somalia in the curriculum — will actually stigmatize these students and create a more fractured school system, say a group of Somali parents opposed to the recommendations.

Some 30 Somali-Canadian parents marched in front of the Toronto District School board office Tuesday to protest recommendations from a board task force on how to address the struggles faced by some Somali students — from higher dropout rates to more expulsions.

“Our children are born and raised in Canada; we don’t need a special brand of education,” said Suban Abdullahi, three of whose children are at university.

The TDSB created the task force a year ago at the request of a number of Somali families who wanted more support for their children at school. After several public consultations, the task force —40 per cent of whom are parents — has recommended a package of supports to be voted on next month by trustees.

However some of the protesters, including Saeed Mohamud, father of three TDSB students and three post-secondary students, said he doubts the board will deliver the supports, which he feels aren’t needed anyway.

“The task force wants to stigmatize all Somali kids and say they’re incapable of learning.”

Many protesters complained the hearings were not well advertised, although some drew hundreds of participants.

Superintendent Jim Spyropoulos said with a city this big, “there are challenges engaging every single member of the community,” but said the Somali task force held public meetings across the city that drew passionate input from a broad array of community members.

“But is there the potential that this (special support) can lead to labelling and affect students who are already marginalized? Yes — but we hope this plan is action-oriented enough to address that issue.”