Home Articles From Somalia to Stanford: The story of a refugee family’s commitment to...

Somali proverb was family’s motto: ‘Without education, there will be no light’ 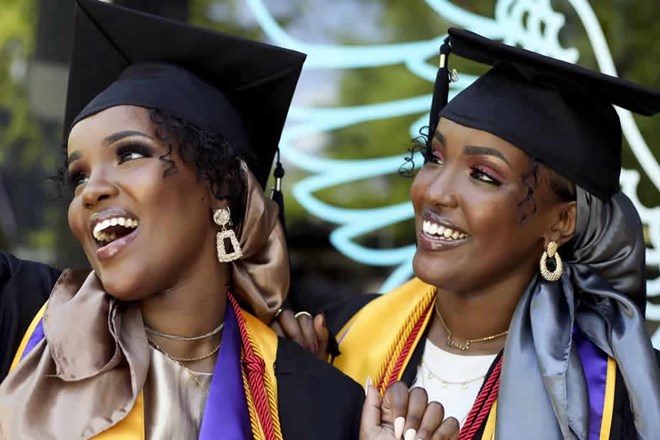 Twin sisters Anisa Dahir and Asma Dahir walked briskly, in high heels no less, up a ramp to the stage where they would be awarded college diplomas and congratulated by Westminster College President Beth Dobkin.

The commencement in Salt Lake City earlier this month marked a key milestone in a journey that is a testament to their hard work, their refugee parents’ insistence that they place a high value on educational opportunities, and the collective efforts of educators and community members who helped two little girls who spoke only Somali when they started kindergarten become college graduates.

The Dahir sisters were born in the United States, but their parents and older siblings were refugees in East Africa who were resettled in Utah.

“My mom, she repeated this proverb to us since we were kids. ‘Aqoon la’aan wa iftiin la’aan,’ which translates to ‘Without education, there will be no light,’” Anisa Dahir said.

Recently, the Dahir family celebrated their twin daughters’ graduation. Each earned a bachelor’s degree in public health and are Honors College graduates.

“Showing my mom that her words are coming true and we’re living through it right now, it’s just so rewarding and so fun. So yeah, I’m just basically just so excited and so happy. It’s a lot of feelings, but mostly happiness and joy,” Anisa Dahir said on graduation day.

Asma Dahir, in an interview a week after graduation, said walking in the ceremony “was like a testimony to our parents that their girls did it, and their sacrifice to coming to America and surviving through civil war and raising us in a foreign land with foreign culture and foreign language was all worth it.”

According to the U.N. Refugee Agency, there are at least 79.5 million people worldwide who have been forced to flee their homes. Among them are some 26 million refugees and roughly half of them are under age of 18.

After a historically low number of refugee resettlements in the United States during the Trump administration, President Joe Biden announced earlier this month that he is revising the nation’s annual refugee admission cap to 62,500 for this fiscal year, up from 15,000.

The United States’ refugee admissions program “embodies America’s commitment to protect the most vulnerable, and to stand as a beacon of liberty and refuge to the world. It’s a statement about who we are, and who we want to be. So we are going to rebuild what has been broken and push hard to complete the rigorous screening process for those refugees already in the pipeline for admission,” a statement from the White House said in part. 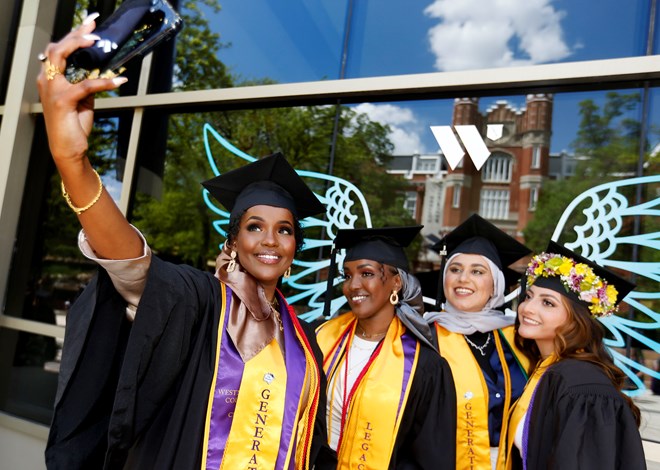 The Dahir sisters and fellow student Jabir Nasir, who graduated with a degree in accounting, were the first to graduate through the Walkways to Westminster program, a partnership of Westminster College and the city of South Salt Lake.

The partnership dates back to the administration of then-Westminster College President Brian Levin-Stankevich, who led the college from 2012 to 2015. The three graduates live in South Salt Lake and participated in its Promise Afterschool Program.

South Salt Lake Mayor Cherie Wood created the Promise program early in her administration with the goal that every child in South Salt Lake would have the opportunity to attend and graduate from college. Wood was elected as South Salt Lake’s mayor in 2009.

The Promise South Salt Lake program, which over the years has expanded to 14 neighborhood centers in the city, provides specialized community programming with a focus on academics through partnerships with 90 entities.

The city’s partnership with Westminster has helped make higher education attainable for its residents.

Wood spent time with the Dahir sisters and Nasir recently and said she is immensely proud of them and excited for what lies ahead.

Nasir plans to start his career, then seek a master’s degree in accounting. 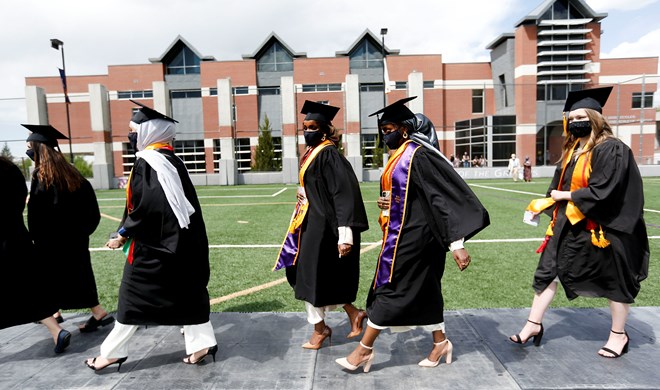 The Dahir sisters, Asma and Anisa, walk with other public health students to their graduation ceremony at Westminster College in Salt Lake City on Friday, May 7, 2021. Laura Seitz, Deseret News

“To finally see this come full circle where these kids started in the Promise Afterschool programs, and then worked with mentors as students and then became mentors themselves, and then become the first youth to graduate from the partnership that we have with Westminster, is almost overwhelming,” Wood said.

The Dahir sisters said their early experiences in school were especially challenging.

“Although we were born here, we didn’t speak English, so we were really separated from our main class” while they attended English as a second language classes.

“The school … didn’t have a lot of diversity. It was predominantly white, and so it was hard for us to really fit in and find ourselves at that young age,” said Asma Dahir.

And the idea of someday attending college?

Reflecting on her sixth grade year at the Salt Lake elementary school, Anisa Dahir said she “was just a little girl who didn’t know what she was capable of.”

In seventh grade, the Dahir sisters enrolled in Granite Park Junior High in South Salt Lake, which is one of the most diverse schools in Utah.

“It was refreshing to see classes of students who look exactly like you, who come from the same places as you and have the same identity,” said Asma Dahir.

The school’s long-standing theme is to inspire students to dream of college and beyond.

“I think that was my first introduction to college because I didn’t really know what college was, what it stood for,’’ Asma Dahir said.

But all of that changed, in part because of Granite Park’s focus on preparing students for higher education and its AVID program, which is short for Advancement Via Individual Determination. 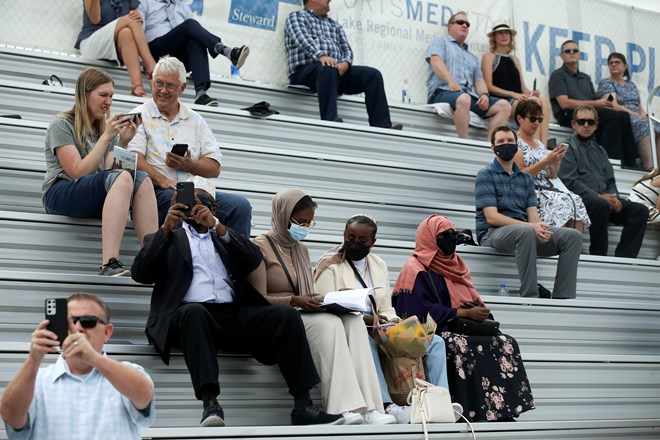 AVID is an in-school academic support program that prepares students for college eligibility and success. It places academically average but highly motivated students in advanced classes and provides support to help them succeed.

Granite Park Junior High is an AVID National Demonstration School, the only school in Utah to earn that distinction.

The Dahir sisters graduated from Cottonwood High School, starting a certification program in surgical technology while still in high school and completing it their freshman year of college. That training enabled them to work and earn a living wage while attending college.

Both sisters continue to work as surgical techs, which means they work in operating rooms passing instruments to surgeons and are responsible for maintaining the sterile field.

Three days after college graduation, Asma Dahir started a job as a surgical tech at one of the Stanford Health Care system hospitals in Palo Alto, California.

That meant the day after graduation the Dahir sisters drove to California to get Asma settled before she started her job the following Monday.

Meanwhile, Anisa joined their sisters and friends on a girl’s trip in California to celebrate graduation before heading back to Utah to work at Intermountain Healthcare.

The Dahir family’s older three sisters graduated from the University of Utah last spring but they didn’t have a traditional commencement due to the COVID-19 pandemic, so Asma and Anisa’s in-person graduation ceremony meant a lot to their parents.

“It’s very joyful seeing my parents’ reaction and how happy they are just makes the experience so much better,” Anisa Dahir said.

Also cheering on the Dahir sisters and Nasir was Julie Tille, who as director of Westminster College’s Dumke Center for Civic Engagement worked to connect the mentoring program with South Salt Lake because of its strong and diverse after-school programs.

Tille said working with the Dahir twins and Nasir during their middle and high school years through Walkways to Westminster and during their college years “has been one of the greatest joys of my life.

“They worked so hard to navigate the college life, excel in and out of the classroom, while also giving back to the community from where they came. I am so excited to watch the many ways they will make our world a better place. It took a village to make all this happen, and I feel so lucky I was able to be involved and so proud to work at a place like Westminster College that makes college access a priority.”