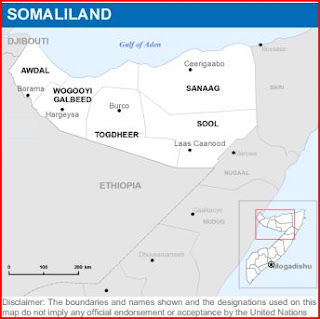 – Humanitarian overview
Drivers and features of the humanitarian situation: Recurrent droughts, flash floods and protracted displacement are the humanitarian issues of concern in Somaliland, which declared its independence in 1991. It has remained relatively stable, but a border dispute with neighbouring Puntland over areas in the regions of Sanaag and Sool has been a flash point and has hampered humanitarian access to the area.

Recent trends: According to the latest food security and nutrition analysis released in February 2013*, people in need of humanitarian aid have decreased to 413,000 from 650,000 since August 2012. The agricultural production in Somaliland has increased by 7 per cent since 2011. The livestock exports have increased 25 per cent since 2010.

Impact: Somaliland has areas, where prolonged drought has led to high malnutrition rates for children under five years of age. About 39,000 children suffer from acute malnutrition. Drought and conflict are the main causes for the displacement of some 85,000 people, who live in settlements in Awdal, Galbeed, Sool and Togdheer regions. About 1.1 million are internally displaced in Somalia.

Challenges: Most displaced people have limited access to land and/or resolution of land tenure and land rights. Somaliland has not yet adopted a policy for internally displaced people and this is a priority for humanitarian partners to address in 2013. Humanitarian access to disputed areas of Sanaag and Sool remains a challenge.
Read in PDF
UN Office for the Coordination of Humanitarian Affairs:

Share on facebookShare on twitterShare on emailShare on printMore Sharing Services