David Moyes is minded to keep Wayne Rooney at Manchester United and the new manager is hopeful he can convince the 27-year-old striker to remain at the club. 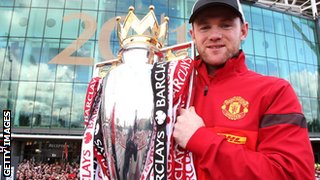 Manchester United have refused a transfer request from Wayne Rooney

Gareth Bale, 23, is set to sign a new contract with Tottenham worth £130,000 a week. It is believed the Welshman is likely to be allowed to leave in 12 months’ time should a bid in excess of £50m come in for him.

Atletico Madrid are ready to let Manchester City target Falcao, 27, leave as a reward for delivering Champions League football to the club.

Spurs are planning a clear-out as they plan to build a team around Gareth Bale. Striker Emmanuel Adebayor and forward Clint Dempsey are likely to make way with the Londoners hoping to bring in Aston Villa’s Christian Benteke, 22, and Barcelona’s David Villa, 31.

Christian Benteke’s Aston Villa future could be decided in the coming days after boss Paul Lambert admitted talks with the Belgium international have been ongoing for several weeks.

Arsenal manager Arsene Wenger, 63, will be able to spend £70m in the summer as a clear-out could knock more than £350,000 a week off the wage bill.

Liverpool are close to securing the signature of Manchester City defender Kolo Toure, 32, on a free transfer.

Fulham are showing interest in Nancy’s winger Yohan Mollo and the French club are willing to sell the 23-year-old for £4m. 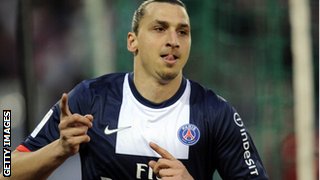 Zlatan Ibrahimovic, 31, and Thiago Silva, 28, will remain at Paris St-Germain, even if coach Carlo Ancelotti leaves for Real Madrid, according to the French club’s sporting director Leonardo.

Rafael Benitez met officials from Napoli in London on Monday to discuss replacing Walter Mazzarri at the Italian club.

Outgoing Montpelier coach Rene Girard has reaffirmed his hope of managing in England.