Manuel Pellegrini has been handed his first Manchester City signing after the club finally settled on a fee with Sevilla for winger Jesus Navas.

Personal terms were agreed with the 27-year-old last Thursday and a statement on Sevilla’s website on Monday read: ‘Sevilla FC has accepted the English club’s offer, taking into account the wishes of the player, who will have to pass a medical.’

City had hoped to take advantage of Sevilla’s financial woes to pay only half of the player’s £25.5million buy-out clause. 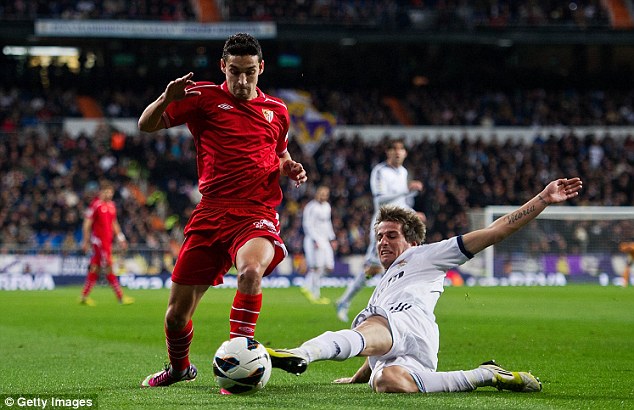 However, with Real Madrid also showing strong interest, the Spanish side held out, so City will pay an initial £20.4m, with a further £2.5m to follow in add-ons, for the pacy, right-sided midfielder.

Speaking after Sevilla’s final league game at the weekend, he said: ‘I am open to anything, because my main aim now is to try to win titles. City are a team I like a lot.’

Navas has plied his trade at the Ramon Sanchez Pizjuan since making his debut back in 2003.

In that time he has won two UEFA Cups and two Copa del Rey titles, as well as being part of the Spain squads that won the 2010 World Cup and Euro 2012. 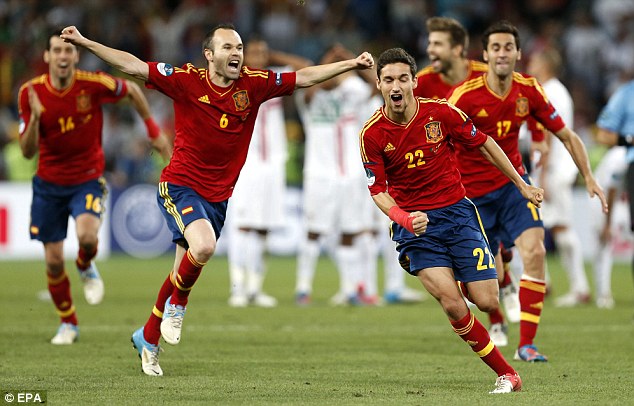 On the run: Navas will move to City from Sevilla for an initial £20.4m, with a further £2.5m to followHe will also join City midfielder David Silva in the squad for the upcoming Confederations Cup, which begins in Brazil later this month.

His international career was delayed because of panic attacks he suffered as a younger player when away from Seville, a problem he has since overcome.

He will join a club in City who are yet to confirm their new manager following the departure of Roberto Mancini, though the appointment of Manuel Pellegrini is widely thought to be imminent.

Pellegrini will certainly know plenty about Navas having spent the last decade in Spain, at Villarreal, Real Madrid and Malaga.

City finished 11 points behind champions Manchester United in the Premier League this season as their title defence ended in disappointment.

2003: November 23. Makes his first-team debut as a substitute during a defeat by Espanyol.

2004: Becomes established in the first team and was also selected for Spain Under-21s.

2006: Part of the team that wins the UEFA Cup, appearing in all matches during the competition.

2007: Sevilla retain the UEFA Cup with victory over fellow Spaniards Espanyol. Navas is also part of the team that wins the Copa del Rey by defeating Getafe.

2009: Having previously made himself unavailable for the full Spain team because of anxiety attacks, receives his first call-up for friendlies against Argentina and Austria.

2010: Sevilla defeat Atletico Madrid to win the Copa del Rey.
June: Scores his first international goal in a 1-0 friendly victory against South Korea.
Called up for the World Cup finals in South Africa and comes on as a substitute in the final against Holland as Spain lift the trophy.

2013: June 13: Sevilla announce they have agreed a fee for the winger with Manchester City.