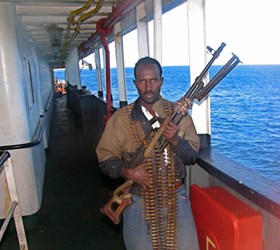 Piracy off the coast of West Africa has now overtaken Somali piracy, a report by the International Maritime Bureau (IMB) and other seafarers’ groups says.

It says 966 sailors were attacked in West Africa in 2012, compared with 851 off the Somali coast.

Five of the 206 hostages seized last year off West Africa have been killed, the document says.

The report, entitled The Human Cost of Maritime Piracy 2012, was released by the International Maritime Bureau (IMB), the Oceans Beyond Piracy (OBP) project and the Maritime Piracy Humanitarian Response Programme (MPHRP).

It says that despite the growing number of pirate attacks in West Africa’s Gulf of Guinea region “the area has not received the attention that was brought to Somalia”.

“In Nigeria, money moves quite quickly unlike in Somalia,” one seafarer is quoted as saying in the document.

“In Somalia, it would take months. In Nigeria, the pirates take our (oil) cargo and the money of the (shipping) company. It would take only weeks, it is quite fast.”

The report says that tackling piracy in both West Africa and Somalia requires “co-operation between efforts at sea and those on land to build maritime security and provide job opportunities to potential pirates”.At the same time, the findings show a 78% drop in piracy off Somalia last year compared with 2011.

The report says this is due to better practices by ship’s captains and crews and the increasing use of armed guards aboard vessels in the region.

But it adds that at least 78 hostages are still being held captive by Somali pirates. Some sailors have been already held for more two years.

Many Somali pirates have used cruel and sadistic methods to extort ransom payments, it says.