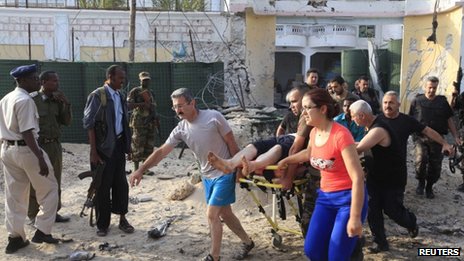 A car bomb has exploded outside a building housing Turkish embassy staff in the Somali capital Mogadishu, according to officials.

At least two people were killed, one of them the suspected attacker.

The Somali Islamist group al-Shabab said it had carried out the attack in the western Hodan district of the city.

It said Turkey was one of the countries that supported the Somali government and wanted to stop the establishment of Sharia.

The group has in the past targeted Turkish institutions.

At least three people were wounded in the latest attack.

Witnesses said a vehicle rammed into the gates of the building and exploded.

Al-Shabab, which had been in control of parts of Mogadishu for more than two years, withdrew in August 2011 under pressure from pro-government forces, but continues to launch occasional suicide attacks in the city.

At least 15 people, including four foreigners, were killed in an assault on a UN office in the capital in May.

The group said earlier it was aiming to increase the number of attacks carried out during the Ramadan fasting period.