Home Articles Manchester City are delighted to announce the signing of Stevan Jovetic from... 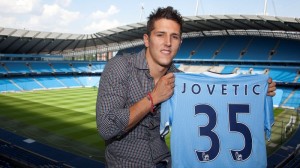 Manchester City are delighted to announce the signing of Stevan Jovetic from Fiorentina.

The 23-year-old Montenegro international will now join up with his new team-mates over the weekend.

One of European football’s most coveted young strikers, Jovetic spent five seasons in Serie A with Fiorentina after previously playing for Partizan Belgrade, where he made club history by captaining the team aged only 19.

His five seasons with La Viola yielded 40 goals from 134 appearances, though he missed the entire 2010/11 campaign after injuring his cruciate ligament.

In Europe, he has scored against Liverpool and Bayern Munich – among others – and at international level, he captained his country for the Under-21s, aged only 17. He has also represented the senior Montenegro side since 2007, playing 27 times and scoring 10 goals to date.

Jovetic, who wore the No.8 shirt for Fiorentina, has taken on the No.35 squad number for City. He joins fellow summer signings Jesus Navas, Alvaro Negredo andFernandinho and close friend and former Fiorentina team-mate Matija Nastasic.

City’s latest signing will be presented to the fans for the first time at City Live – buy your tickets here.