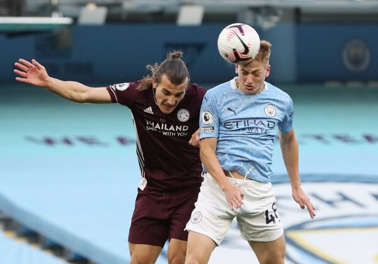 Manchester City sensation Liam Delap is reportedly attracting a lot of interest ahead of the summer transfer window, with a number of Championship clubs keen on taking him on loan next season, but it would arguably be a mistake for the Citizens to let him go.

According to teamTALK, Derby County, Middlesbrough, Stoke City, Cardiff City and West Bromwich Albion are all keen on signing the teenage forward, who has produced some exceptional performances with Manchester City’s academy sides since joining from Derby County.

In 25 appearances in all competitions this season, the 18-year-old has contributed a remarkable 26 goals and five assists, which included one on his senior debut for Pep Guardiola’s side – an excellent run and finish in the 2-1 win against Bournemouth in the Carabao Cup.

After that game, Guardiola was full of praise for the youngster, saying: “He’s a different striker to what we have in terms of physicality.

“We see in training how good a finisher he is. Now he has to be calm and keep working.”

Delap came off the bench in the 5-2 defeat against Leicester City early in the season but that remains his only Premier League appearance to date, whilst his substitute appearance in the 3-0 FA Cup win against Birmingham City was the last time he featured in Guardiola’s side.

He has been used sparingly by the Spaniard this season and has been allowed to develop with the under-23s, but following the announcement that Sergio Aguero will leave this summer, Guardiola confirmed that Delap will be training with the first team next term, which suggests that he wants him in his senior squad.

Considering the youngster’s phenomenal goal record this season, there seems no reason why he can’t offer an alternative option up front next season in City’s senior side, and therefore it would be a shame to see him go out on loan.

The striker, who has been described as a “winner” by Man City academy coach Carlos Vicens, deserves a chance to show what he can do next season. Therefore, sporting director Txiki Begiristain could be making a big mistake if he allows him to leave on loan this summer, as it could leave City seriously short of attacking options if no replacement for Aguero is brought in.